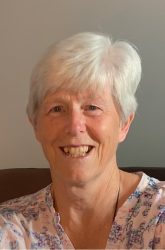 Catharine’s first job was with IBM. She then moved into teaching, first Geography then Computing, just as computers were being introduced into schools and technical colleges – an exciting time!
She later worked as IT Support for a company in Chippenham and survived the Millennium Bug, another exciting time.
She then ran an internet company with her son, selling cross-stitch and other craft items. She now helps her son with his business doing jobs ranging from maintaining databases to laying carpet tiles!
She joined the U3A in 2008 and a year later became secretary. She runs Play Reading 2 which specialises in reading light-hearted plays. Other interest are walking, travelling, gardening and anything else that seems interesting!