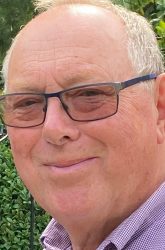 Geoff and his wife, Sandra, moved to Potterne in September 2017 and joined U3A soon after. They are both retired primary school teachers and taught in Basingstoke for over 30 years each. Geoff was a deputy headteacher at a C of E Primary School. In retirement he developed his interest of social history by researching family and local history. He enjoys giving presentations of his research and has had several articles published on-line.
Last year he attended Martin Houghton’s presentation to recruit volunteers and was asked to join the committee. He wanted to give back something to Devizes U3A as he had benefitted so much in a relatively short time. He and Sandra have made many friends in the groups and at the coffee mornings. Through U3A Geoff has improved his French, visited Bletchley Park, learnt about Caravaggio and found a long lost member of his extended family.